SEOUL, May 11 (Yonhap) -- Guaranteeing a living wage for everyone is important, and Hyun Sang-won (an alias), the owner of a convenience store in downtown Seoul, agrees in principle that people deserve fair pay for work rendered.

But the harsh reality facing the 50-something retiree is that he is currently tinkering with the possibility of reducing part-time workers at his store amid a saturated market and increased costs, which he says partly stems from the recent hike in the countrys legal minimum wage.

Preaching an income-led economic expansion and a reduction of the pay gap between workers, the Moon Jae-in government increased the minimum wage for all workers by 16.4 percent this year to 7,530 won (US$7) from 6,470 in 2017.

The government is determined to further raise the minimum wage in Asias fourth-largest economy to at least 10,000 won by 2020 on the belief that it is time to break the economy away from an export-dependent growth path. Policymakers have emphasized that the average household should earn more and the government must strive to offer quality jobs with good pay.

"Theoretically, the wage increase is a win-win for me and part-time workers." Hyun says. He, however, makes clear that what makes sense as a thought exercise is not necessarily reflected in reality, "Its a fairly steep rise over a brief period of time," he pointed out. The store owner argued that the rise in minimum wage is taking a toll on many smaller shops, as they are under the gun to cope with the sharpest hike in about two decades. 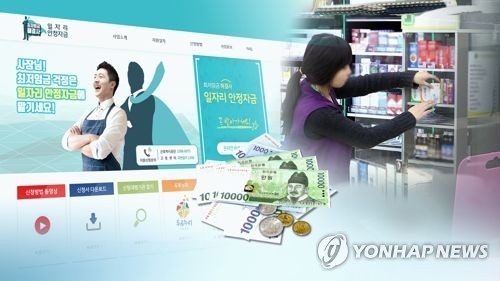 The policy is reverberating as it has taken flak for the recent rise in prices for coffee and doughnuts. Some fast-food chain operators have already marked up prices, partly blaming the minimum wage hike and warning of further adjustments to accommodate the mandated increase.

In a recent poll by the Korea Food Service Industry Association, some 80 percent of its members said they are planning to raise food prices due to worsening balance sheets.

Some 24 percent have already raised prices by an average 9.7 percent, with 78.6 percent saying that they are mulling an average 18.4 percent price hike.

"The minimum wage hike cannot be the biggest reason for the slowdown in their business, but it could be one of the major factors in that," Seo Yong-hee, a researcher for the association said.

The business circle claims that the sudden rise is leading to a drop in the number of available jobs, the top policy priority sought by the Moon administration.

Recent data showed that the number of people newly applying for unemployment benefits reached a record high during the first quarter of this year as some industrial sectors have been slashing workers to reduce costs and the minimum wage hike caused employers to lay off workers.

Some 628,000 people got unemployment benefits, worth 1.49 trillion won in total, during the first three months this year, up 6.9 percent, or 40,000 recipients, from a year earlier, according to data from the state-run Korea Employment Information Service.

The number of recipients is the largest since 2010, when the government began compiling related data.

The number of temporary and part-time workers was tallied at 6.07 million during the first three months this year, down a sharp 181,000 from the same period last year, the data showed.

During the same time span, the number of those employed in the wholesale, retail, lodging and restaurant industries, sectors that are typically sensitive changes in pay, fell by 98,000. 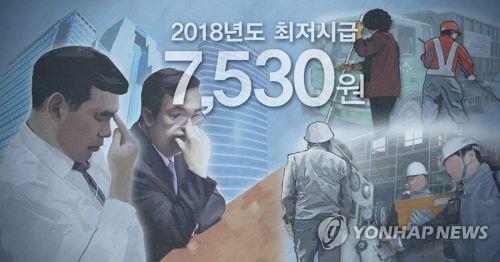 Local experts say that the minimum wage hike has hit labor-intensive sectors the hardest. These include such businesses as delivery services, restaurant chains and small-time retailers.

The wage increase also raises the question of what will happen in the future, since the government has just set aside 3 trillion won in state funds to cover extra hiring-related expenditures only for this year.

Last week, Finance Minister Kim Dong-yeon said it is too early to say that the wage hike is negatively affecting employment, although he acknowledges that small shop owners appear to have adjusted working hours to absorb the wage hike.

"We are analyzing the impact (of the minimum wage hike) on the retail, food and lodging sectors," Kim said, stressing that any uncertainties related to the wage increase should be resolved quickly.

Ju Won, an economist at Hyundai Research Institute claimed that the sharp increase in the minimum wage has led to a slump in the labor market, with the self-employed being hit the hardest.

"The increase undoubtedly means fewer jobs, which bodes ill for students and other part-time workers in particular," he said.